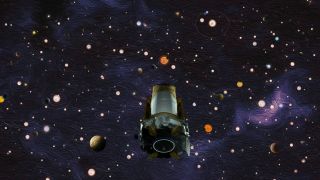 NASA has officially retired one of its most successful space telescopes, Kepler. After nearly a decade in space photographing the stars, the telescope has left a space legacy that has seen it observe thousands of stars and confirm thousands of planets.

According to NASA, the telescope did far more than what it first expected of the device, expanding our knowledge of life, the universe and everything... you get the idea.

"Not only did it show us how many planets could be out there, it sparked an entirely new and robust field of research that has taken the science community by storm. Its discoveries have shed a new light on our place in the universe, and illuminated the tantalizing mysteries and possibilities among the stars,” said NASA's Science Mission Directorate Thomas Zurbuchen, about Kepler.

But what exactly made the space telescope so special? And, more importantly, what were the optics used to observe the far reaches of the galaxy? Here's 5 things you need to know.

The Kepler team is feeling proud today! There really is no fuel left in @NASAKepler whatsoever. Every single drop of hydrazine was used for science. 💧 That is an astonishing success on top of what already was a wondrous achievement. Thank you @BallAerospace. 🚀 [1/2] #K2Mission pic.twitter.com/scOmkBarT0October 30, 2018

1. It was the largest camera launched in space

2. It had the largest mirror ever launched into orbit

One of the most important parts of the Kepler telescope setup was the mirror. It used an 37.4-inch front lens that linked up with a 55 inch primary mirror. The 'largest-ever' accolade was short-lived as the Herschel Space Observatory launched a bigger one a year later.

3. The camera used was a Schmidt camera

When Bernhard Schmidt created the Schmidt camera way back in the 1930s, he would have struggled to believe that his design would end up photographing new areas of the galaxy. But that was the camera used, as its strongly curved focal planes were perfect for space photography (or any photography where a large amount of sky needs to be covered). The Schmidt camera on the Kepler is still the largest one of its kind in space.

What has the @NASAKepler space telescope achieved during its time in space? Take a look at the numbers: https://t.co/Ei3m5dSdvh pic.twitter.com/zIgJw0gRSXOctober 30, 2018

4. Not every pixel made it back home

"The Kepler camera takes one exposure every 6.5s. Exposures are summed onboard and stored at either 1765.5 s (29.4 min) cadence (a.k.a. 30 min or long cadence) or 58.89 s cadence (a.k.a. 1 min or short cadence). At these data collection cadences, the Solid State Recorder onboard the spacecraft can store only 5.4 million of the 95 million pixels available. The pixels collected are chosen strategically to provide postage stamp images centered on the positions of targets of interest."

5. Scope with a view

Kepler's field of view was, obviously, fixed against the sky. It had 115 square degrees, which equates to around 0.25 percent of the sky. So, if you wanted to capture the whole sky you would need 400 telescopes of Kepler's capacity - something we are sure NASA is working on...

Read more about Kepler and its fantastic voyage on Space.com.