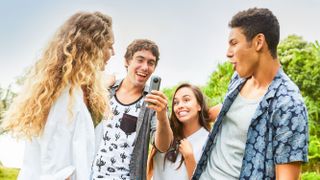 The best 360 cameras are as easy to use as a regular action cam, but capture a full 360 'spherical' view of the world around you. It's pretty hard to get your head around at first, but if you don't know which way to turn (a 360 joke), we're here to explain the tech and help you choose one of these terrific new camera designs.

The key to understanding 360 images is to imagine capturing a scene not in a flat rectangle, but on the inside of a sphere. You view a 360-degree image from within this sphere, moving your smart device or a window in your web browser to look around.

360-degree stills are easiest to figure out because everything is static. 360 videos are more confusing because you have the freedom to look where you like, but the action carries on regardless, which means as a viewer you kind of have control but don’t, and it’s easy to end up looking the wrong way while things are happening.

You can either consume 360 photos and videos directly via smart devices and websites with the necessary navigational interactivity, or as a content author you can use this spherical raw material to produce smaller, ‘flat’ windows on the scene with a lot of editing control.

For example, with 360 stills you can create wide-angle shots and panoramas. It’s 360 video that offers most potential, though, because you can shoot from a static position and than pan and zoom with moving subjects later in software.

There is just one thing. These cameras sound like they’ve got good resolution for stills and videos, but it’s spread over the inside of a sphere. When you start viewing and editing smaller sections of this, that resolution doesn’t go as far as you think.

Broadly, there are two types of consumer 360 cameras: spherical action cams designed to survive hazardous adventures, and lifestyle cameras that are cheaper, smaller and often easier to use.

Our buying guide has a few of each type, to help you decide which is best for you. We've already made our decision!

The next stage in the evolution of 360-degree camera tech, the Insta360 Evo is one of the most ambitious models on the market, offering both 3D 180-degree and 2D 360-degree filming modes, expanding your creative options while producing videos and stills of excellent quality, to a maximum resolution of 5.7K at 30p. It shoots 18MP stills, too, and packs in a 1,200mAh battery that Insta360 says will last around an hour (our testing shows this to be pretty much accurate. Users can take advantage of the plentiful Insta360 mobile and desktop apps for easy stitching and rendering, making the Evo extremely easy to use even for novices in this field. Be aware that even though the Evo looks somewhat like a GoPro, it’s certainly not waterproof (and indeed the exposed MicroSD slot might make you think twice before taking it out in poor weather). Otherwise, in terms of versatility, portability and usability, it’s definitely our pick of the 360-degree cameras available right now.

Designed to make shooting 360-degree and 180-degree photos and videos into an easy and intuitive process, the Vuze XR is effectively two cameras for the price of one. With the press of a single button, switch from 360-degree (2D) and 180-degree (3D) modes, shooting half a sphere or a full sphere of VR footage as you please. The XR also allows for in-camera image stitching as well as live broadcasting, further opening up your creative options, and the useful smartphone app also allows you to better monitor and control what you’re doing. The integrated hand grip makes it excellent for casual day-to-day usage – it’s not waterproof unless you add a separately sold case, so don’t go bringing it on kayaking trips and the like, as you would the GoPro Fusion. Beautifully designed, and producing excellent footage to match, the Vuze XR is an excellent tool for 360-degree imaging.

This shirt pocket camera makes 360 imaging and editing so easy

The predecessor the Insta360's EVO, the ONE X has got the appealing slimline shape of the Ricoh Theta V, the 5.7K 'overcapture' of the Garmin Virb and an app that offers advanced video editing and subject tracking on your smartphone. Insta360 makes a great play about this camera's 6-axis gyro system and 'FlowState' stabilisation, and it's every bit as good as they say – we got the odd 'shimmer' during low-light shooting indoors, but in decent light it's as smooth as you like, and playback stays level however you angle the camera. Even better, if you get the optional 'invisible' selfie stick, it's hidden in the recorded footage and it looks like you're a bystander in your videos and photos and not actually holding the camera at all. On release the Insta360 ONE X felt like a massive step forward in simplicity, usability and quality for 360 cameras, and it still works brilliantly now.

The VIRB 360 has everything: ruggedness, quality and features

The VIRB 360 is a rugged action cam which is waterproof to a depth of 10m and comes with clip-on cradles for both a regular tripod mount and a GoPro mount. You can operate it as a standalone camera via a small mono display and three multi-function buttons, or you can control it via the VIRB app. The VIRB’s stills show average sharpness but with very little color fringing and well-blended seams where the two hemispherical images are stitched. Its 5.7K capture should yield better results, but you need a computer for that. In-app stitching is restricted to 4K, but the app’s HyperFrame Director offers simple but efficient tools for adding smooth camera pans and angle of view changes to create separate standalone movies for saving and sharing. The in-built GPS and G-Metrix sensors also offer data overlays for extreme sports fans who want their viewers to see this extra data. If you like your adventures rugged, this is the tool for job.

The Theta V is instantly likable. Its tall, slim shape is perfect for holding in one hand without obscuring either lens, and you have easy access to the controls. These are very simple and you don’t need the smartphone app to start shooting. You set the Theta V to stills or video mode and press the shutter-release button to capture the image – and that’s all there is to know. The smartphone app is equally simple. You can browse images both on the camera and already transferred to the app, and simply tapping on a file on the camera to view it initiates the transfer and deletes the image from the camera’s memory – and as it’s fixed at 19GB, that’s probably just as well. The app has basic but effective VR viewing options and there’s a separate Theta+ app for editing your images. The still image quality is very good, and the video isn’t bad either, though there is strong purple fringing where the two hemispheres blend. It's good, but it's upstaged now by the Insta360 ONE X (above).

Powerful, tough and smart, but the dual card slots can be annoying

The GoPro Fusion is slimmer than the Garmin VIRB 360 and Nikon KeyMission 360 and, like its other two action cam rivals, it’s waterproof, though only down to a depth of 5m. With a maximum video resolution of 5.2K, the Fusion uses a feature called OverCapture to allow the extraction of regular ‘flat’ Full HD movies from its spherical footage. The extra resolution can be exploited either by the companion smartphone app or by the free-to-download GoPro Fusion Studio software. The QuickCapture button starts recording with a single press, even if the camera is switched off, and there’s a Photo button which does the same. You can also use voice commands to start and stop recordings and add Highlight Tags to find key moments later. Like other 360 cameras, the Fusion is effectively two cameras back to back. Oddly, though, it requires two matched microSD cards to go with them, which makes image transfer to a computer more fiddly later on.

It’s iPhone-specific, but the Insta360 One is neat, easy and effective

The Insta360 One is designed solely for use with an iPhone (or iPad). It has a flip-out Lightning connector that plugs straight into the iPhone’s Lightning socket and also fixes it to the phone. It feels reasonably secure but would feel even better if there was some kind of additional fixing point. But this direct connection offers fast, reliable and fuss-free communication. The accompanying app launches automatically and provides an instant, lag-free live view of what the camera sees. If you to use the camera independently, you can use its single power button to capture stills or video, or fire the camera remotely via Bluetooth. There’s no Wi-Fi so there’s no live view, and your iPhone now simply acts as a remote release. The image quality is great and the editing tools in the app are second to none at rendering ‘flat’ video from your 360 images, with a Viewfinder mode for panning and zooming in real time, a SmartTrack mode for tracking moving subjects and a PivotPoints to create smooth panning movements. It's not as good as the newer Insta360 Evo or even the ONE X, but you should be able to find it a lot cheaper than either.