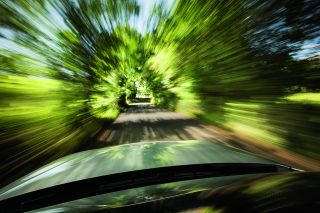 With a combination of the right shutter speed and a clever camera setup, it’s possible to make creative speedy shots safely.

Shooting from the passenger seat of a car, we’ll show you how using a slower shutter speed can help turn the passing surroundings into a blur to capture the feeling of zooming down country lanes.

We’ve hired a convertible BMW car for this shoot so we can position our Nikon D750 above the windscreen for a clear composition across the bonnet. But it’s possible to capture similar shots from any car by shooting through the windscreen.

The trick with these shots is to get the camera as stable as possible inside the car to take advantage of its suspension. That way the camera will sharply capture the front or inside of the car, but the surroundings will be blurred nicely as we drive past.

Video tutorial: Learn how to shoot motion blur photographs on the move

Step by step: Motion blur in your motor

We’re using a Nikon D750 with a wide-angle 24mm f/2.8 lens, as we want the full-frame sensor to capture as wide a view as possible from the passenger seat of the car. We’re also using a Manfrotto monopod held firmly against the windscreen, with the leg positioned carefully.

A quiet and smooth country road is best for these shots, as you’ll need to drive up and down a few times to nail the technique. We found roads without potholes flanked with high hedges on either side worked best. It also helped to wait until passing cars were no longer visible.

With the camera in position we pre-focused on the bonnet of the car by disabling autofocus and manually adjusting the focus. We shot in Shutter Priority mode to control the shutter speed, so our DSLR set a matching aperture for a good exposure.

Getting the car frozen but the scenery blurred meant balancing the driving speed with the shutter speed. We tried driving at 30mph and using a fast shutter speed of 1/100 sec, but it froze everything and made it look static. To add blur, we needed a slower shutter speed.

We next tried driving the car at 20mph and slowing the shutter speed to 1/2 sec, but this resulted in the car bonnet blurring as well as the scenery. We needed to speed up the shutter somewhat, but also to drive faster to keep the scenery outside the car blurred.

We found the optimum combination was a car speed of around 30mph with a shutter speed of 1/10 sec. Bear in mind that your settings will depend on your lighting conditions, the smoothness of the road, and the state of your own car’s suspension.

Read more:
How to create multi-frame action sequences
The best Nikon lenses
How to capture a driver's portrait