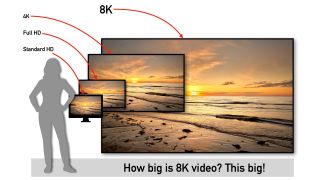 The launch of the Canon EOS R5 has really thrown everything up in the air. It's an 8K video camera at a time while we're still getting used to the potential of 4K video – and it makes the 6K capture of the Panasonic Lumix S1H, amazing at the time, look like a stopgap.

Video resolution is not measured in the same way as megapixels in stills photography. With megapixels you have to remember that doubling the resolution doesn’t mean your pictures are twice as wide and twice as high. They just have twice the area, so you just have to do a bit of fancy footwork with square roots to figure out your pictures are bigger but not massively bigger (1.4x wider and taller, near enough).

But video resolution is different. It’s quoted in horizontal resolution only, so that when people talk about 2K video (new slang for Full HD), they really do mean video 2,000 pixels wide (or thereabouts). 4K video really is 4,000 pixels wide (or slightly less or more, depending on whether you are talking about 4K UHD or C4K).

So when we get an 8K camera like the Canon EOS R5, that means it captures video that’s 8,000 pixels wide. It makes 4K look puny.

If you want to convert this to megapixels, this is what you get:

It’s true that we don’t have 8K TVs in our living rooms right now, or 8K monitors, but videography isn’t just about the resolutions in use today. What happens if five years from now, your client (or your movie studio) wants an 8K version of the video you shot? 8K video, like 4K before it, is to some degree about future-proofing your work, and not just shooting what you need right now.

8K video does have two immediate practical benefits, by the way. First, you can grab 30+ megapixel frames to make still images as good (video shutter speeds permitting) as anything you might have shot with a stills camera.

Second, you can pan and crop 8K video down to 4K in post production to achieve better framing, better panning and better composition when it’s not possible to get them all spot on at the time of shooting.

Read more: What is 8K? And what does it mean to photographers and videomakers?