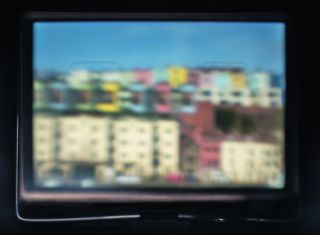 To photograph the wrong way through a second D-SLR body

Take the lens or body cap off your camera, hold it up to a bright scene, and peer at the mirror. You should see a faint, blurry image of what’s behind the camera reflected in it. And it’s that scene that we want to capture in this tutorial.

Because there’s no lens to focus the light onto the mirror of our second camera (as it’s only passing though the viewfinder), our final shot will be blurry, but that’s all part of the charm with shooting like this. The key is to find a nice, bright scene with simple shapes, and of course to keep both cameras as still as possible.

To photograph the view projected by a camera’s viewfinder onto its mirror, you will obviously need two cameras: one to take the shot and one to project the view. Don’t try to do this handheld, as the light has to pass through a lot of camera and will lose its intensity. Instead, put both cameras on tripods or stable surfaces, to keep everything still.

Getting close up to the view captured on the mirror inside the second camera is essential, and most ‘standard’ lenses won’t focus close enough, so you really need a dedicated macro lens for this technique. To focus, we set our lens’s minimum focusing distance and then moved the viewfinder camera back and forth until the projected image was clear.

Because the light coming through the second camera is dim, you’ll probably have to set a slow shutter speed, but if your shooting camera is on a tripod, this obviously won’t be a problem. We set a shutter speed of 1/50 sec at f/5 and ISO200. We also used a remote release, but if you don’t have one, you could set your camera’s self-timer to 2 secs instead.