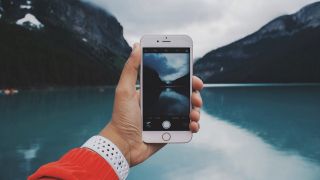 Flickr likes to make a big splash at the end of every year, and one of the most interesting parts of the celebrations is the annual device report, which details the cameras that were most frequently used to upload images to the platform.

While Flickr is arguably less of a hub for the photography community than it used to be, the fact that the platform still boasts more than 75 million registered users means its findings still make for an interesting snapshot (pun semi-intended) of what photographers are using.

DSLRs accounted for 33% of images uploaded, an improvement over 25% in 2016. Point-and-shoot cameras, somewhat unsurprisingly, dropped to 12%, a fairly precipitous fall from 21% the previous year. Mirrorless models, meanwhile, accounted for just 4% of images taken, a figure unchanged for the third year in a row.

Unsurprisingly, the dominant brand of smartphone was Apple with its iPhone. In fact, the top 10 devices used on Flickr in 2017 were pretty much all variants of Apple’s iPhone – only the Canon EOS 5D Mark III stood out from the pack, squeaking in at number nine.

The top three cameras used on the service were the iPhone 6, iPhone 6s and iPhone 5s (in descending order of popularity).

When the numbers were divvied up by brand rather than device, Apple accounted for 54% of images taken. Canon was in second place with 23%, while Nikon managed a respectable third with 18%.

If you just fancy browsing through some incredible images, Flickr has also released some comprehensive collections of its top photos from 2017. You can view the top 25 photos from around the world, or dive into top images by genre, or top images by country.

Read more: Why do some phones have two cameras on one side?