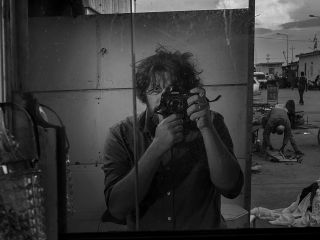 For many photographers, Magnum Photos is considered the industry’s gold standard. The legendary agency, whose co-founders include Henri Cartier-Bresson and Robert Capa, is arguably the most prestigious in the world. And being selected to join was something that Albanian photographer Enri Canaj aspired to, when he was fortunate enough to spend a year studying with Magnum’s Nikos Economopoulos in 2007.

“I became familiar with Nikos’ work while I was a student and I was very impressed by his book Into the Balkans,” explains Canaj. “After finishing my studies, I heard about the workshop that Nikos was doing in Athens. It was open for every young photographer to apply. When I discovered it, it was the last day of application!

“His work inspired me as a photographer and being accepted in his workshop at the time was something that had a huge influence for me, not only as a young photographer but as a young man as well. I attended the whole year and I could say that year had a significant inspiration to pursue my career and develop myself as a photographer.”

The two shared a passion for documenting migration. In fact, Economopoulos photographed the first wave of migrants crossing the Albanian-Greek border in the early Nineties – which included a young Canaj and his family, who made the journey from Tirana to Athens in 1991. “I left Albania when I was 11 and returned as an adult when I was 21. But through Nikos’ book, I had the opportunity to travel back to Albania before I went to visit it in person.

“Nikos’ images from my country were taken in the same period when I left together with my family. Those pictures were not only visually familiar to me, but I could sense the smell of some of the places he had photographed. The only thing that hadn’t change when I went back after 10 years was the morning’s smell; it was exactly the same as many many years ago, and it remains the same nowadays.”

Canaj retains the same passion today, as a Magnum Photographer in his own right, documenting migrants and the associated human crisis. “After almost three decades I’ve documented migrants reaching Europe. In recent years the Balkans have become the main stage for the first wave of people trying to reach central and western Europe.

“It’s the place where you could see people living in another dimension. High adrenaline. Exhaustion. Deep breaths, because they were alive. Hope, because they managed to touch Europe with one foot. Strength and determination, to continue the journey and jump into the final destination with both feet. People on the run with no time to stop and think. The arrival of hundreds of thousands of people is a historical change for Europe. And to me, all this was very familiar. Their present was walking in parallel with my past.”

From documenting migrants in the Balkans to his most recent assignment photographing the desperation of human transit in Niger, there is a constant in Canaj’s photography: his Olympus equipment. “For most of my work and personal projects I use Olympus’ flagship OM-D E-M1 series cameras, with the M.Zuiko 12-40mm f/2.8 PRO and M.Zuiko 17mm f/1.8 Premium lenses.”

As a photojournalist constantly on the move in challenging conditions, Olympus’ compact yet capable system has been invaluable. “I have used Olympus cameras from 2013, and the main reason that I changed was the good quality of the lenses. Before I was shooting with a full-frame camera. It was big and heavy, not very practical.

“When I started using digital cameras by Olympus, there was a big difference compared to the camera I was using before. Starting from the size, which is much smaller, I can put it in my pocket if necessary. The weight as well is much lighter; you don’t worry about where to put it when you stop photographing for a short while.”

The benefit of this small, lightweight setup means that Canaj carries his kit with him even when he’s not working, meaning that he never misses a moment. “The Olympus cameras and equipment are part of my daily life. Even when I don’t shoot every day I always have with me my small bag with my camera and lenses in it. My camera is my closest companion, I feel it as an extension of myself.”

Unsurprisingly, when asked about the lessons he’s learned over his career, Canaj’s advice – like his photography – is all about the human condition. “What I could share as something very precious I’ve learned from Nikos Economopoulos – and which I truly believe is only in photography, but in all professions the most important and difficult part – is to choose what kind of person you want to be. How you think of and accept yourself reflects on the way you accept others.”