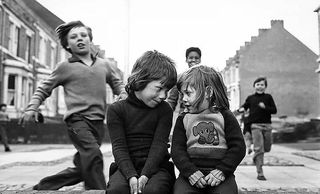 The inaugural Photo North festival opens its doors in Harrogate, Yorkshire, on 9 November, bringing some unseen images and plenty of "thought-provoking" content to the region.

Curated by well-known professional photographer Peter Dench, Photo North is themed along three strands – music, war and marginalisation – and features a raft of big names from the worlds of photography and the moving image.

“We’ve put our heart and soul into curating unique takes on our three themes to make internationally-renowned photographic art fun, exciting and accessible to all, as well as highlighting topical issues," says festival director Sharon Price.

Images taken by the late social documentary photographer Tish Murtha, arguably best known for her Youth Unemployment book, will be posthumously presented by her daughter Ella.

Photo North takes place at the Harrogate International Centre from 9-11 November and is sponsored by Olympus.

The organisers say they have secured a "sensational" line-up that will appeal to professional photographers, photo-enthusiasts and keen amateurs, or anyone wishing to engage with the timeless appeal of the medium.

Alongside the visual feast on offer, there will also be hands-on professional workshops and a live music social for the duration of the event, which is expected to attract 5000 people.

'Last of the Crooners', a tribute to singers and musicians in an East End pub by Sony award-winning photographer Tom Oldham, gets its first-ever gallery airing at Photo North. Other music-themed programming includes 12-year-old breakthrough acoustic artist Poppy Eaglesham, and 'My First Vinyl' by record label founder Dean Belcher.

'My First Vinyl' is a portrait salon which will see Dean serenading his sitters with his vintage record player as they clutch the first-ever vinyl record they bought. He'll also be showing off some of his 33RPM portraits.

Photo North's war theme features 'Women and War', a commemoration of the centenary of the First World War through unseen images by the era's front-line women photographers, and Tom Stoddart's 'Shadows of War', a video that marks the centenary of the signing of the Armistice.

These sit alongside Paula Bronstein's World Press Photography Award-winning work on the daily effects of war on Afghan civilians.

Another highlight of Photo North is 'All Lit Up’ by Jane Hilton, a work-in-progress of people, places and objects that have been lit up in America.

Finally, the austerity theme features daily screenings of the 'Sleaford Mods – Invisible Britain' film from 2015, Tish Murtha's celebrated images of austerity and the young, and newcomer John Bolloten's uncompromising 'Nothing to See Here' collection, which documents homelessness and addiction in Bradford.

Peter Dench and Sharon Price are founders of The Curators and the well-renowned former film and photography gallery White Cloth Gallery.

Find out more about the festival via the Photo North website. Full-day tickets cost £22 for adults and £11 for students (with the production of an NUS card), while a three-day pass will cost £44/£22, plus booking fees.