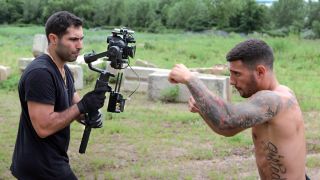 Panasonic Lumix mirrorless cameras have earned an enviable reputation in the industry as the ultimate hybrid systems, equally adept at shooting pristine photographs as they are at capturing cinematic video.

This was epitomized by the Panasonic Lumix GH5, which ushered in the 4K 60fps revolution and opened the floodgates to a tidal wave of new content creators and cinematographers.

In fact, the S1H is so powerful that it is the first mirrorless camera to be certified by the Netflix Post Technology Alliance for use as a primary 'A' camera on Netflix Originals productions.

So what makes Panasonic Lumix cameras supremely suited to cinematography? Here are five features that will elevate the work of everyone from online vloggers to videographers in the film industry…

The Panasonic Lumix S1H is the world's first camera to deliver full-area 6K at 24fps (with a 3:2 aspect ratio) and 5.9K at 30fps (in 16:9). So no matter what you're shooting and how you're delivering your footage, the Lumix S1H won't let you down.

Its 35mm full-frame sensor offers 6,024 x 4,016 effective pixels across its entire area, which can accommodate a variety of shooting standards and aspect ratios, and achieve impeccable resolution via downsampling.

That includes 16:9 and 17:9 in Cinema 4K, UltraHD and FullHD for both full-frame and Super 35 formats, as well as 4K anamorphic 4:3 in Super 35 (with the option to de-squeeze the image on the camera monitor). These can all be encoded with HEVC compression or rich 4:2:2 10-bit tonality, meeting the demands industry shooting.

Traditionally, when increasing the ISO sensitivity, a sensor would amplify the voltage running through the circuit – which would, in turn, amplify the amount of noise and degrade the signal-to-noise ratio. By contrast, dual native ISO gives each pixel a dual sensitivity switching circuit; this means that higher ISO can be achieved by bypassing the lower ISO circuit and the need to implement gain amplification, giving noise performance at higher sensitivities that's very similar to those at lower ones.

Whether you're shooting in a low light environment, working on a production without a huge lighting budget, capturing sports or shooting in a theater with extremely dim lighting, the S1H affords cinematographers maximum flexibility with minimum compromise.

Undercrank and overcrank, with 2fps to 180fps!

Overcranking is one of the oldest tricks in the cinematography playbook. By dialing up (or 'overcranking') the framerate, a camera will capture more frames per second; when played back at normal speed, those extra frames have the effect of slowing down the footage, achieving a slow-motion effect. This is what happens when you shoot at 120fps for playback at 24p, for example.

However, while less commonly used, the inverse is also true. By undercranking the framerate, less frames are captured per second to achieve a faster and more kinectic effect when played at normal speed. This might be used for, say, an action scene in a movie or a straightforward timelapse effect.

The Panasonic Lumix GH5/S and S1H enable you to shoot at anywhere from 2fps to 180fps; in Variable Frame Rate mode this will automatically conform your footage to fast- or slow-motion, according to the playback rate you set (such as 24p). However, if you want to maintain autofocus and record audio, you can also use High Frame Rate on the S1H to create slow-motion in post-production in either 4K / C4K at 48p or FullHD at 120p.

Use native and adapted lenses easily, with L-Mount

The S series full-frame cameras – the Panasonic Lumix S1, S1R and S1H – all make use of the L-Mount. Three of the industry's leading optics manufacturers, Panasonic, Leica and Sigma, have formed the L-Mount Alliance to rapidly mature this standard, with over 100 native lenses due by March 2021 – including at least 50 cine lenses.

However, the beauty of the L-Mount is that it possesses a very short flange distance (the space between the rear lens element and the image sensor). This makes the mount incredibly adaptable to other lens standards, in particular the EF and especially the PL mount favored by the cinema industry.

This means that professional-grade optics such as Zeiss Super Speed and Cooke Panchro lenses can easily be used with the S system. And, thanks to the in-body image stabilization system, they can benefit from five shutter stops of stability, making it possible to shoot steady shots even without a rig.

While the Panasonic Lumix GH5/S and S1H feature powerful rear LCD monitors and electronic viewfinders, as well as the ability to output via HDMI to larger displays, it can still be difficult to maintain correct exposure levels while filming.

That's where the various exposure assists come into play, enabling you to see and correct your exposure with at-a-glance visual feedback. Trusty zebras quickly indicate areas of your frame that are overexposed by overlaying a hatched, zebra-like pattern to show what is too bright for the camera's dynamic range to capture.

Brightness, luminance, hue and saturation can be displayed as visual wave data using Waveform Monitor, with Vector Scope enabling you to view and measure waveforms as vectors. With these aids you can empirically determine correct exposure levels rather than 'eyeballing' it, and instantly check that your colors and white balance are correct – ideal for matching footage!

These are our favorite features on the Panasonic Lumix cameras, but don't take our word for it – test drive an S-series body and see for yourself! The Lumix Loan scheme enables photographers and videographers to trial Panasonic's incredible camera system for two weeks. Click here to find out more!