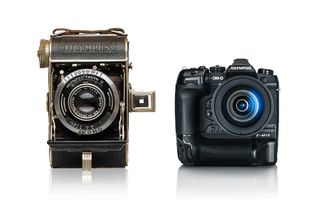 A camera is only as good as the glass that’s attached to it.

This was one of the philosophies of Olympus’ long-time camera designer, Yoshihisa Maitani; but it’s also a phrase that encapsulates the company’s 100-year history. Though known today for being the go-to camera brand for photographers around the world, Olympus didn’t make cameras straight out of the gate: it made microscopes and the glass within them.

Founded in post-World War I Japan, the brand we now know as Olympus began in 1919 as Takachiho Seisakusho, an optics company focused primarily on making microscopes. While it was arguably a leader in the industry, Olympus had its sights set on a new business – and in 1936, the company made those dreams a reality.

From its first camera, the Semi-Olympus I, all the way to the newly released OM-D E-M1X, Olympus has exceled at creating an unmatched experience for photographers.

1936: Zuiko lenses and the Semi-Olympus I

It would be a little over 10 years before the company took on the Olympus name, but in 1936, it released its first camera: the Semi-Olympus I. Fitted with a 4.5-inch Zuiko lens – “Zuiko” translates to “light of the gods” in Japanese – the body of this landmark camera was supplied by Proud, another Japanese camera manufacturer. The impeccable image quality and lightness of this first Zuiko lens kickstarted a legacy that the company is still known for today.

The aforementioned famed Olympus designer Maitani once said: “If it's not there when I go to buy it, I should make it." Thus, the Pen F was born. Building upon the 1959 Olympus-Pen model, this revolutionary camera was equipped with a rotary titanium shutter, which was perfected through an enormous amount of effort of behalf of the company’s engineers. Hyper compact thanks to its sideways-flipping reflex mirror, the Pen F was the world’s first (and only) half-frame SLR. Despite its small stature, however, it had a dizzying range of interchangeable lenses, making a leader in portability, usability and, of course, optics.

1972: The introduction of the OM Series

The company’s first foray into the world of 35mm SLRs was worth the wait. The M-1, later renamed the OM-1, was a challenge for Maitani’s designers. They sought to reduce the weight of the traditionally bulky SLR and make it more durable. A typical SLR could last for 10,000 photos; Maitani wanted Olympus’ to make it to 100,000. This camera was smaller than its competitors without any compromise in quality, relying on innovative technology to prevent rust and reduce the noise and shock caused by shutter operation. The OM Series (now known as OM-D) remains a top choice for photographers to this day, and Maitani’s philosophies are still evident in the design.

1986: A camera that can withstand the elements

One of main obstacles facing photographers even today is the durability of their gear, especially in harsh weather conditions. Olympus tackled this problem head-on in 1986 with the AF-1, or Infinity, which was the world's first waterproof, fully automatic compact camera. Olympus' waterproofing has only improved in the decades since, and many of the technologies instituted in the AF-1 can still be seen in its cameras today. The company even has a Tough camera line that’s waterproof, crushproof, shockproof, freezeproof and dustproof.

By the time 2003 rolled around, Olympus had been making digital cameras for nearly a decade. But with the introduction of the E-1 Digital SLR, it took its line to new heights. The E-1 was the first SLR camera with a with a four-thirds based CCD sensor, which allowed for the use of interchangeable digital lenses. The Four Thirds system was a revelation, as its 4:3 aspect ratio sensor made edge distortion a thing of the past.

With lightweight, compact bodies, mirrorless interchangeable lens cameras revolutionized the way that on-the-go photographers shoot; however, they also offered less options for lenses and accessories. Enter the Olympus OM-D E-M1. Its Micro Four Thirds System boasted the largest selection of compatible lenses in a mirrorless lineup, giving it a competitive edge over other models on the market. Thanks to its effective in-body image stabilization, contrast and phase detection autofocus and a fast TruePic VII image processor, this mighty little camera also offered the highest image quality in Olympus’ product lineup at the time of its release.

In many ways, the OM-D E-M1X feels like the culmination of a life’s work. In this case, that life is the collection of innovations that Olympus has put in motion over the past 100 years. Olympus’ sharp M.Zuiko lenses have never been in better company thanks to the E-M1X’s astonishingly fast and accurate dual autofocus system, and performance is taken to new heights with AI-based Intelligent Subject Detection. The E-M1X’s dust, splash and freezeproof IPX1-rated weather sealing makes other pro camera bodies red with envy.

This camera lives up to Maitani’s promise to build highly portable systems with the best stabilization technology and the most optically superior lenses. And since it’s a member of the long running OM family, it packs all these features into a frame that’s both compact and lightweight, with an integrated vertical grip and an image stabilization system that’ll have you shooting spectacularly detailed pictures without so much as glancing at a tripod.

Walking through Olympus’ history, it isn’t hard to see how the company came to develop the industry-leading cameras that it’s known for today. From their cutting-edge M.Zuiko lens technology to their rugged, weatherproof frames, Olympus cameras are a top pick for photographers who won’t let anything stop them from getting the perfect shot.