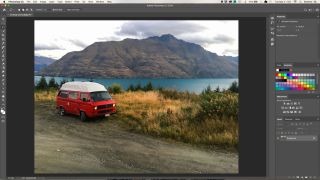 Adobe’s annual Adobe Max conference has brought a long list of updates, advances and innovations across its sprawling Creative Cloud ecosystem and Photoshop CC gets its share.

Adobe’s mantra this year is “velocity workflow”, which means getting your work done faster, easier and better than ever. This means many of the improvements are to the whole Creative Cloud infrastructure and how you will be able to work across devices, apps and platforms in the future.

Adobe’s multitude of announcements are aimed equally at designers, artists and illustrators, though Photographers get a look-in too with new Lightroom CC, Lightroom CC Classic and Adobe Camera Raw features and the very exciting announcement that Photoshop for iPad is coming.

But Adobe still sees Photoshop CC as being at the centre of its Creative Cloud system, and this year it’s celebrating its twentieth release with a list of additions and enhancements. None of these are exactly ground-breaking, but they’re all useful, well thought-out and timely.

Photoshop’s Content-Aware Fill technology can sometimes magically remove an object from a scene as if it had never existed or, just as often, pull in some extraneous objects and details that look completely wrong. Now, though, you can choose the source area for content-aware fills and the repair is added to a new layer so that the original is left untouched.

And if you’ve always been frustrated by the need to commit to a layer blend mode change before actually seeing what it will look like, you’ll be pleased to hear that Photoshop CC will now show the effect of different blend modes live as you scroll down through the options.

That’s not the only frustration to be removed. You can now use the Undo keyboard shortcut repeatedly to go back through your editing changes as far as you need to without resorting to Photoshop’s History palette – previously, the command/ctrl-Z shortcut just toggled between the Undo and Redo commands.

This ties in with Adobe’s “velocity workflow” theme – getting stuff done faster. Another example is dialogs which automatically apply changes to images when you switch to a new tool after text, crop, place, or transform operations without making you hit Return or click a button. You can now double-click text to edit it and objects like image layers are now transformed ‘proportionally’ – you don’t have to hold down the Shift key.

Other changes are aimed more at designers than photographers, including a Frame Tool for auto-scaling and fitting images into shapes or text, while Symmetry Painting duplicates brushstrokes across one or more ‘symmetry lines’ for a mirrored or mandala effect.

As part of its new velocity workflow, Adobe wants Photoshop CC to be easier to use, so there’s a new Home Screen, a What’s New section and new in-app learning tutorials.

There’s probably not enough here to convince subscription-sceptics to finally take the plunge with an Adobe Photography or Creative Cloud plan, but for existing subscribers this is a modest but useful Photoshop update which they will of course get automatically as part of their subscription – and may of the big changes in the Adobe Max 2018 announcements apply to image sharing and editing across the Adobe ecosphere as a whole rather than individual applications.

Some of Adobe’s announcements, such as Photoshop CC for iPad, are only technology previews, but the updates to Photoshop CC should be live straight away.

The best photo-editing laptops in 2018

The best monitors for photographers